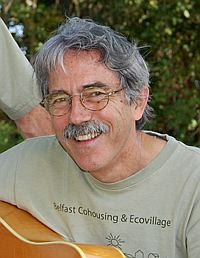 This morning as I was carrying my breakfast dishes to the kitchen, I noticed a certain slant of light coming through the windows of my sunroom and found myself veering from the “things-I-need-to-do” path I’d set for myself the evening before. Conditions were perfect for taking photos of the interior spaces in our house (something I’ve been wanting to do in preparation for putting it on the market), so I decided to seize the moment and follow that path instead.

I attached the camera to my tripod and set up for the first shot — looking back towards the entryway from the sunroom — and noticed that the long counter on that wall was covered with stuff. Books, papers, office supplies, bric-a-brac. I moved all the clutter to the dining table, strategically placed a couple of African violets on the counter to give the space a little color, then snapped the picture.

Turning 180˚ to take in the rest of the sunroom, it was immediately clear I needed to move the vacuum cleaner from the middle of the room, the pieces of sheepskin (cut from an old waterbed pad) that Barbara was crafting into something else, the deflated green-and-white fuzzy Celtics beach ball that came from God-knows-where and somehow found a place in our lives, and a few other sundry pieces of flotsam and jetsam.

Next up was the corner where the dining table sits, now covered, of course, with all the stuff I’d moved from the long counter. Thinking ahead (aha!), I decided to postpone that shot, knowing I’d need to move even more stuff onto the table when I photographed the kitchen, as the counters there were dutifully obeying the “Flat Surface Law” which states (contrary to what some physicists will tell you): “Every available flat surface in any human habitation must be covered with stuff.”

I was getting the hang of it now, though. Sometimes it wasn’t necessary to actually move things from one place to another. I could just push it all into a corner and frame the shot to avoid that, or cover it up with something more visually appealing. Some things that were hugely cluttered — the corkboard next to my phone, for instance — turned out to be OK as they were, giving the place a “lived-in” kind of feel. Nothing Better Homes & Gardens would go for, mind you, but it worked for me.

In the process of going from room to room, rearranging all manner of stuff along the way, I lay my hands on a dizzying array of clothing, furniture, tableware, books, papers, pictures, laundry, exercise equipment, tools, personal care items, rotting produce, bottle caps, kids’ artwork, you-name-it. The funny thing is, it didn’t look all that bad to me when I started. It still doesn’t, really.

We’re not slovenly, by any means. We’re just busy people who have, for many years, bought into the Great American Misconception that “stuff” somehow makes your life better. Hey, sometimes it does. But more often than not, it just sort of attaches itself to you in very insidious ways and finds a place to live under your roof (or in your garage, or your barn). I have a feeling that if most of us could see all of our worldly possessions in a pile in our front yards, we’d be horrified.

On occasion the thought crosses my mind that maybe a saffron robe and a rice bowl ain’t so bad. But with cohousing in my future, I get to walk a middle path. The downsized house that Barbara and I will be moving into will force us to touch virtually every piece of stuff that has attached itself to us over the past thirty-plus years and decide what is really, truly essential. What is really, truly precious enough to be allowed to share our new living space. What we really need for ourselves, and what we can own in common with other members of the community.

Here are some other interesting takes on "stuff."


Oh, and here's a link to house photos, if you're interested…
Posted by Belfast Cohousing & Ecovillage at 1:25 PM