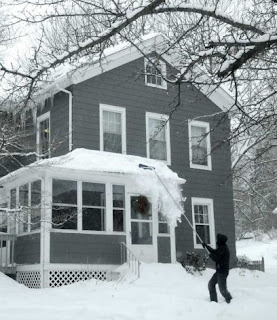 When I moved to Maine back in the 70’s, I bought a place the realtor euphemistically called a “handyman’s special.” The price was right, and I considered myself something of a handyman, so I jumped right in. I learned much of what I know about building from remodeling (and sometimes rebuilding) that little house. That includes mistakes made…

As the snow began to pile up on my roof that first winter, I thought the icicles forming on the edge of the roof were pretty cool —  a Currier & Ives print come to life. Then my kitchen ceiling started leaking. I was mystified until one of the old Mainers I worked with explained the physics of ice dams.

On any roof that’s inadequately insulated or ventilated, some heat from the house will escape through it. When there’s snow on the roof, that heat melts the layer of snow in contact with it, which then runs down the (warm-ish) roof until it reaches the eaves. At that point, being beyond the area of the roof where escaping heat keeps it liquefied, it re-freezes and forms a little dam made of ice.

Drop by drop, this dam thickens and works its way backward up the roof until it reaches a point where it can seep beneath the roofing material and make its way into the house. Depending on the pitch of the roof and how far the water has to go before reaching that point, you might wind up with an ice dam six to ten inches thick. Assuming you don’t want to climb up on the roof with a shovel, there are two ways of dealing with this: install electric de-icing cables on the edge of the roof (expensive and not very green), or get a roof rake.

A roof rake is basically a long pole with a plastic or metal scraper blade attached to the end. Instead of lifting and tossing the snow, as you would do with a shovel, you just muckle on to a clump with the scraper and use the pole to pull it off the edge of the roof. If your house isn’t too tall, you might be able to do this standing on the ground (safe). In my case, I get to do part of it standing on a ladder, and part of it standing on the roof of my woodshed (not safe). If you rake your roof immedialtely after the snow falls, you won’t have any problems. Wait a day, and you’ve got the start of a dam. Now, besides raking the roof, you’ve got to break the dam apart. I use a small hand axe, and try really hard not to chop holes in my roof.

In certain circumstances it can be a sort of meditative process. Most of the time it’s ulcer-inducing. And hard on the roof. Metal roofs are less problematic than shingles because they’re slipperier, and any ice dams that form are more likely to break loose on their own. Better still are roofs that are properly insulated and ventilated. You know you’re looking at such a roof when you see a load of snow atop it and no icicles whatsoever along the edges. It’s a beautiful thing.

When I drive by the prototype house on Crocker road and see fresh snow just sitting there like a white cap, I smile. I want a house like that. Hey, wait a sec… I’m getting a house like that! WAHOO! Want one? We’ve still got a few left. Otherwise, I’ve got an 18’ roof rake in pretty good shape that I’ll sell you, cheap…
Posted by Belfast Cohousing & Ecovillage at 5:22 PM