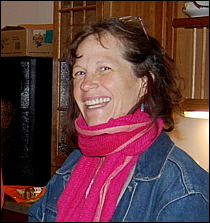 My yoga studies started over twenty-six years ago, jeez maybe around thirty. My very first yoga class was at an urban studio in St. Louis near Washington University. It was bare bones zen grunge decor. I was the youngest person there and we took cold showers halfway through the asanas. When I ask myself what inspired me to first go to yoga class I think it may have been Lilias, the woman who did yoga on the PBS channel. Even though as teenager I made fun of her reflexively to bolster my own wobbly sense of social status as a young female primate, I simultaneously wondered if she got her courage to appear in tights and leotard on TV from doing yoga. I remember liking it immediately. It was weird, but it was also both challenging and phat in a sensory way. What I mean by that is that it absorbed me completely while I was doing it. And my body and brain were equally absorbed. No part of me felt left out just watching, or already anticipating what came next. It put me in the zone.

Over three decades my practice has lapsed many times, for months, even a year once or twice. But I kept returning because no other do-anywhere, solo activity so consistently gave me that indescribably sweet feeling of being at home again in my own body. A feeling similar to my experience as a kid of running and playing outside all day, finally coming inside fabulously relaxed and happy, full of sunshine, chlorophyll vapors and oxygen. I know few adults who can afford to spend several days a week climbing trees, playing kickball, wrestling in the grass, riding bicycles, etc. to their hearts' content. Yoga class 1+ times per week and 15 to 45 minutes on my own daily give me that feeling many days.

Although my body has gained flexibility over the years, that seems inconsequential beside the expanded sense of intimacy with my body and my mind. I am proprioceptively bigger: that means athletically introverted. Yoga practice also gives me a deeply cared for sense of well-being.

It is difficult to write about something that is necessarily experiential. Yoga must be experienced to be understood and then after 6 to 9 months of going to class with a teacher you like and trust, you realize one day that a little light has gone on somewhere. But where? In your mind? Your heart? Your no longer stiff hips? Your SOUL?! What?!! It is a very curious awareness of self, but at the same time not self. Because it is awareness of breath, empty space inside, and internal geography that feels more Micro-Intra-Galactic Wild than SELF. I have become more Mary O'Herin, the fiery, sensitive, spontaneous, watery nature. At the same time I have become less attached to being Mary as I sink deeper into the being I call myself. Just be-ing is the greatest expression of my true nature, knowing by feeling it that I am a tiny part of something much bigger: the Micro-Intra-Galactic Wilderness Alliance.

You see it starts to sound so, so... mystical and OUT there, but my experience and what I am trying to describe is distinctly clear and defined by measurable parameters of flesh and oxygen in gaseous and liquid form. I understand all the weird tricks yogis are known for: they were attempting to advertise the fantastic results of yoga. Advertising savvy is not a benefit of yoga, by the way. I do not think yoga is the only way to enter the Micro-Intra-Galactic wilderness within. There are many paths. A yogi from Chicago cited yoga as one of the Healing Salves which are loosely: singing, dancing, laughing, exercise (enjoyed), diet, nature, silence, and story-telling. His recommendation was to have some personal recipe of them all in one's life. That, my friend, is my best attempt for now to explain why I am so devoted to yoga. The word Yoga means union: the mind is calmed, the body is enlivened, and they meet one another in the spaciousness of the soul as their electro-magnetic currents blend smoothly. I added that last bit. Namaste! I bow to the Divine Flame within You.
Posted by Belfast Cohousing & Ecovillage at 5:06 PM