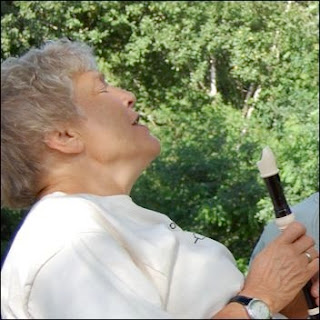 Let me tell you one of the reasons why I want to live in cohousing, and especially cohousing on forty-two acres of rolling pasture land with areas of woods. Silence. Silence gently broken only by useful sounds: a tractor tilling, doors slamming behind laughing children, a tire swing or a hammock squeaking. And conversation. And music. My true hope is that the music we hear outside will be the music made by people and other creatures. And, I hope to have walkable spaces which even in the heat of a busy day will be so silent that my ears will ring and I will shake my head just to be sure I haven’t suddenly become deaf.

Let me share two quite different acoustic experiences I had recently near my home in the Salem, Massachusetts area.

For the first one, Bill and I traveled to the resonant Boston Symphony Hall for an extraordinary combined concert by The Del McCoury Band (bluegrass) and The Preservation Hall Jazz Band (Dixieland and Blues). It was a romping, rollicking, musical two hours, which had the sold-out crowd roaring and screaming for more. But the part that hit me the hardest was an a cappella moment. The words a cappella mean literally “in the manner of the chapel, ” but it refers specifically to voices without instrumental accompaniment. The four members of the Del McCoury Band stepped away from their microphones and stood in a curved group on the edge of the stage. The expected hush fell, which in a space like Symphony Hall is remarkable enough. Then, one voice at a time, they began a traditional gospel song. It was led by one voice on the simple verse, then joined by the other three voices at the chorus. It was so quiet that I could hear the entrance of each man on his part, then the tingling ecstasy as they met and swelled and tuned into the chord. I sat straight up in my chair in rigid listening pose, not wanting to miss a crumb of each musical moment. I didn’t. My hands burned with heat when I was finally convinced to stop clapping, whistling and hooting along with everyone else. So, you see, I love music — the more a cappella the better.

The second experience came a few weeks ago as I stood in the early morning with my dog on his first outing of the day. Nearby was a city yard, grassy and tucked behind the house next door, so that even in busy Salem it was relatively quiet. As I stood in reverie with the cold March air on my bare cheek and my ears exposed, the soft call of the mourning dove pierced my thoughts. Again, I stood in rigid silence, afraid to lose any part of the sound or the moment.

I have had similar experiences at my house in Waldoboro: standing intently on the river bank and craning my ear to the woods as the evening falls and hearing the enchanting rising song of the hermit thrush. Or the high cry of the slowly circling osprey, looking in vain for a fish for dinner. Or a robin caroling along after a summer thunderstorm.

For the most part, it’s hard for me to find silence a walkable distance from my house, since I can’t drive or even bicycle. I can take the commuter rail and subway to Symphony Hall, but it takes more than an hour, and it costs about $60. My dream is to be able to step out my door into the peaceful quiet of a Belfast summer morning and stand, silent and still, until once again a soul-piercing bit of a cappella music wafts to me on the breeze.
Posted by Belfast Cohousing & Ecovillage at 10:40 AM