Who's in Charge? — Jon Ippolito 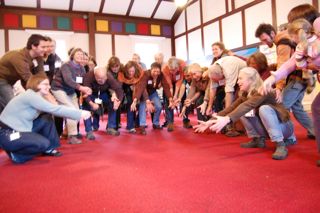 "Who's in charge?" is a question that comes up occasionally when people ask me about Belfast Cohousing & Ecovillage. I suppose I shouldn't be surprised; in my life, I've had my share of bosses. Explicitly, or implicitly, I've handed over to landlords, CEOs, and presidents the power to decide for me what color my walls should be, which computer programs to use, and whether to go to war.

These days a lot of people seem to think such hierarchies are natural. Children have grown used to their parents telling them what they can and cannot do. Even tenured professors at my college expect a president to give them a vision and tell them how to achieve it.

But I don't think that's the way it has to be. Nature knows few hierarchies; geese switch off leading a migrating flock, while the behavior of bees, bacteria, and boletes emerges from a complicated set of interactions with no single creature leading the others. In soil, sand, and surf, networks abound. The largest creatures on the planet are not elephants or blue whales, but interconnected colonies of the Great Coral Reef or the subsoil mycelium that takes up 2000 acres in Oregon.

Nor does every successful human enterprise involve a powerful executive that others follow. The Wabanaki people of the northeast, whose ecovillages predate ours by millennia, shared power in a way that lessened the higher up the ladder: decisions of the tribal confederacy could be overruled at lower levels by the elders of a village, which could in turn be overruled by the clan mothers of a family. And today the single resource that is arguably the most concentrated repository of human knowledge ever, Wikipedia, is maintained almost entirely by volunteers with no bosses — by ordinary people like you and me.

No matter how natural it seems to me, the fact that Belfast Cohousing & Ecovillage has chosen a self-developed, consensus-based model of governance has caught some people's attention lately. At the 2010 ESTIA conference "Ecovillages Redefined" on 22 October, Equity Member Joline Blais talked about this at a discussion she led on the role ecovillages might play in a sustainable future. Also presenting at the conference were Roger Kelly of the Centre for Alternative Technology (CAT) in Wales and Daniel Greenberg of Living Routes at the University of Massachusetts. Local luminaries featured at the conference included small farming advocate Mark Fulford, LongGreenHouse veteran gkisedtanamoogk, and Belfast Cohousing Equity Member Jeffrey Mabee.

Joline and I also presented on bottom-up governance at the William S. Cohen Forum on The Promise & Problems of Transparency on 12 November at the University of Maine. Representatives from the Maine governor's office and Senator Susan Collins spoke mostly about sunshine laws in the era of Wikileaks, worrying about how to reconcile the need for privacy with the danger that some leader will hide information that should be shared. In contrast, Joline presented Belfast Cohousing & Ecovillage as an example of built-in transparency. When decisions are made by everyone sitting in a circle coming to consensus, everyone who needs to know automatically does, and all are invested in the process of decision-making.
Posted by Belfast Cohousing & Ecovillage at 4:19 AM