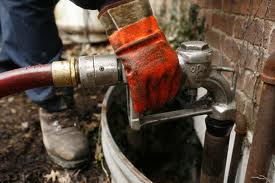 I just wrote a check for $469.77 to the oil delivery man. This strikes me as hugely ironic. First of all, it’s the middle of July, for crying out loud! And secondly, we don’t even heat with oil! Well, maybe I should qualify that…

We heat primarily with wood, but use some oil in the “shoulder” seasons, when firing up the wood boiler (we have a forced hot water heating system) is hugely inefficient. Our domestic hot water is also connected to the same system, so we wind up using oil there as well when the wood boiler is inactive. On the whole, I’d guess that wood supplies probably 75% of our heating and hot water. And since the wood is cut right on our property, there’s no trucking involved and I get to make some choices about which particular trees are harvested. Let’s call it a “green-ish” or “sort-of-sustainable” approach to supplying our heating needs.

Still, there is that matter of the oil man. $469.77 for 127 gallons of fuel. My mom, who lives on a meager fixed income in a big drafty house, cringes when she hears the furnace fire up on those cold winter nights. Dollar bills fly out the window. Does anybody see this getting any better?

Images of plumes of oil billowing from a blown out well into the Gulf of Mexico and vast tracts of boreal forests in Canada being leveled to mine the tar sands of Alberta make it clear that the oil companies intend to extract every last drop, wherever it’s found, whatever the cost. There are even plans afoot to drill areas of the Arctic now made accessible by receding sea ice. Hello?!

When I look for places to lay the blame, I don’t have to look any further than the mirror. In my younger days, I was just naïve. Lately, it’s more a matter of lifestyle momentum — choices I’ve made (such as living ten miles from the nearest store) that dictate many of the terms of my “agreement” with the oil producers. Still, I have to believe that it’s never too late to make course corrections. And though I may not be able to cut that cord just yet, throwing my lot in with the other members of Belfast Cohousing & Ecovillage is a significant step towards that goal.

I’ll live in a house that requires 90% less energy than a conventional home. I’ll be located just two miles from town. I’ll have much of my food supply growing just outside my door. I’ll be sharing a multitude of resources with my neighbors. I’ll be part of a group that has made sustainability a guiding principle, and not just a buzz-word. I’ll be making a difference in the world. And seeing a whole lot less of the oil man.
Posted by Belfast Cohousing & Ecovillage at 12:39 PM 1 comment: